Finding Us Once You're In Ramallah

Go to the Ramallah/Bireh bus station where all the #18 buses arrive from Jerusalem’s Damascus Gate; you should be able to see our sign on top of a building towards the big mosque. Exit the bus station via the pedestrian-only exit onto a one-way street (if you exit from where the buses exit, just take your first left). Our building is the second building on your right, about 50 meters from the station, with the arched windows on the top floor. Enter via the mall and take the elevator to the top floor.At night, you will need to enter via the parking garage, which is locked by a big metal gate. Go to the small door in the gate and ring the bell. Once you hear the lock buzzing, push hard on the door, walk up the ramp, and take the elevator to the top floor. Call us if you have difficulty finding us (+970-(0)56-934-9042). 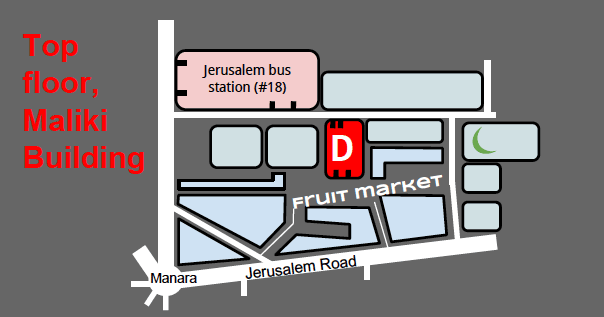 Bus number 18 connects Jerusalem (Damascus Gate bus stop) to downtown Ramallah for under 10 NIS. Sometimes the bus is numbered 218, or 19, or 219, but they’re all the same. The bus stop is 1 block north from Damascus Gate. 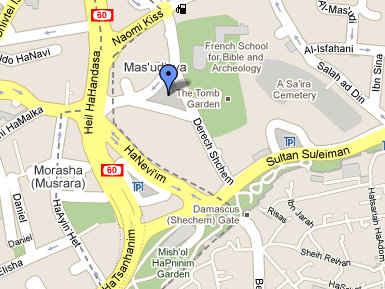 So if you’re at the gate, cross the street at the traffic light and continue straight up the pedestrian street; you’ll see the station on your left after less than 200 meters. If you have trouble finding it, ask for the Jerusalem Hotel, which is just in front of the station.To reach Damascus Gate from Abraham Hostel, take the tram from HaDavidka station towards Heil HaAvir station and get off on the third stop, called “Damascus Gate”.When doing the trip in reverse, you must pass through the infamously time-consuming Qalandia checkpoint. Depending on the soldiers orders on that day, you might have to cross on foot with all your luggage. To avoid luggage problems, you can get off at Qalandia checkpoint but take a white minivan to Jerusalem via another checkpoint, Hizma, where you do not cross on foot. Note that the buses start running early in the morning but they stop around 8pm!Many tourists are under the mistaken impression that their travel to the West Bank will be tracked as they pass through checkpoints. This is not true, and normally there will be no record kept of your travel from Israel into the West Bank. You should not experience any problems other than transport delays at the checkpoints!

You must first get to Jerusalem before you can reach Ramallah. Tel Aviv to Jerusalem takes only about an hour with a collective taxi (called sherut in Hebrew) from the central bus station and costs around 30 NIS. You can also take the train from the main train station.

Most tourists land at Ben Gurion Airport near Tel Aviv. From there, you can take a collective taxi run by Nesher (no schedule, departs at all hours whenever full) to Jerusalem (around 33 ILS to the West Jerusalem bus station and twice as much to specific addresses anywhere else in the city), and then the bus to Ramallah (see Jerusalem section) or Bethlehem (bus number 21). Note that the West Jerusalem bus station (also called Central Bus Station) is not the same bus stop from which the buses to Ramallah and Bethlehem depart, so if you come from the airport, it is worth it to pay extra and ask to be dropped at the Damascus gate bus station (across from Jerusalem Hotel), because if you get off at the West Jerusalem bus station, you will have to pay for a taxi (30-40 NIS), take bus 21, or take the light rail (with a prepaid ticket of around 7 NIS; it runs from 5h30 AM to midnight 5:30 except on shabbat). Estimate about 3 hours from the airport to Ramallah using public transportation.

You can also come directly to Ramallah by taxi in only 1 hour. BUT, it costs 250 NIS, and it must be arranged in advance, since most Israeli taxi drivers will not go to the West Bank. Contact us and we can arrange an airport taxi pickup for you at no extra charge.

When doing the trip in reverse, from Ramallah to the airport, you should book in advance with the collective taxi company (Nesher: 02-6257227) and take it from their office at the high end of downtown Jerusalem’s Ben Yehuda Street or pay double for a pick-up from any location. This company is notorious for awful customers service; plan on a 2 hour ride to the airport and a flexible pick-up time. Note that you must always be at Ben Gurion Airport 3 full hours before your departure time for extensive departure security checks.

Though Israel makes an effort to keep foreign activists out of the West Bank, it is recommended that independent travellers be honest about their travel plans to border officials at the airport. Travel to the West Bank is legal and frequent; lying can lead to deportation. However, expect a longer security check (1-2 hours) on arrival and departure if you mention West Bank travel.

The central collective taxi (called “service” in Arabic) station has regular service directly to Ramallah. It takes about 45 minutes and they run until at least 8pm. Don’t forget your passport for the checkpoints!

The main collective taxi (called “service” in Arabic) station has regular service directly to Ramallah. It takes about 1-1.5 hours and they run until at least 7pm. Don’t forget your passport for the checkpoints!

Most tourists coming from Jordan use the King Hussein/Allenby Bridge crossing, which links directly to the West Bank near Jericho. Like all entry/exit points in the West Bank, it is controlled by the Israeli military. A bus is available from Amman, Jordan to the crossing (1 hour). Plan 3 hours for the extensive security checks and waiting at the crossing. On the West Bank side, you can take a collective taxi to Jericho or Jerusalem. Note that if you cross from the West Bank into Jordan via the Allenby/King Hussein crossing (the most direct route), you will need a Jordanian visa in advance, which you can obtain in Ramallah or Ramat Gan (near Tel Aviv). In Ramallah it takes under an hour in practice, though in theory you are asked to plan for 2 days.

By crossing from Jordan into Israel via Aqaba/Eilat in the south (the closest crossing to Petra), tourists can then travel within Israel to Jerusalem (via Egged bus) and on to the West Bank from there. Going into Jordan via this crossing requires an exit tax but no advance visa.

From The Dead Sea

As when coming up from Eilat, you must catch an Egged bus either to Jerusalem and then on to Ramallah, or you can get off at Jericho to catch the collective taxi from there to Ramallah. Hitchhiking is also very common to get north from the Dead Sea, since public transportation is so limited.

If you cross via the Sheikh Hussein Bridge (different from King Hussein/Allenby Bridge!) in the north, you can then reach the West Bank most efficiently by taking public transportation within Israel to Jerusalem and then continuing on to the West Bank. Going into Jordan via this crossing requires an exit tax but no advance visa.